What is “stock” Android?

Even though Android is the most popular operating system in the market, you may not know that not all Android phones run the same software. I’m not just referring to the different dessert names that Google assigns to the releases like Froyo, Gingerbread, Ice Cream Sandwich or Jelly Bean. There are also different dessert revisions running on different phones in the market.

Google released Android as open source software, meaning a device manufacturer does not pay to license it, and they are free to make modifications to it with one key stipulation. If you want to include Google services on the phone, such as Gmail, Google Maps, and Google Search, there are certain things you cannot change. For this reason, most manufacturers create simple “skins” where they add their own spice and flavor to the OS, but the underlying functionality is more or less the same. Samsung’s skin is called TouchWiz, HTC’s skin is called Sense, and Motorola’s skin is called Motoblur.

(A notable exception is the Kindle Fire, which runs a heavily modified version of Android. In fact, Amazon has modified Android to the point where you can hardly tell it is using it at all. That’s also why it doesn’t include the generic Google services out of the box.)

The problem with these skins is that they handicap the Android experience.

First, it causes devices from different manufacturers, and sometimes the same manufacturer, to have different settings and options. It makes it very difficult for Android users to help and provide support for each other unless they are using the exact same device.

Second, because of the skins, it is very difficult for the manufacturers to validate the latest versions of the Android software against the skin they’ve placed on a particular device. This leads to fragmentation in the market, where devices can fall one, two, or even three major revisions behind the latest and greatest software. The fragmentation is a headache for developers who have to support multiple versions of the OS with their apps, and a letdown for users who are denied access to the latest and greatest Android features.

For this reason, Google created their Nexus line of Android devices. The benefit of the Nexus line is that they run a “stock” version of Android. In other words, it is a pure Android experience. There are no skins and no custom modifications. All Android features are available. There isn’t any carrier modification or “bloatware”.

Best of all, updates to the software come directly from Google and are applied days (worst case a couple of weeks) after they are released to the public. Having owned two Nexus devices, this is a huge advantage. 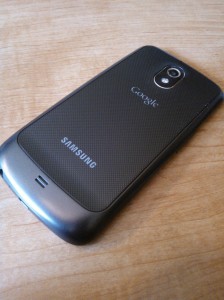 When I purchased the Nexus One in January 2010, it was the first device running Android 2.0, code named Eclair. When Froyo (version 2.2) and Gingerbread (version 2.3) were released, my Nexus One was the first device to receive it. For the two years that I used the device, I never felt like I had an old phone because I was always running the latest and greatest software. I started using a Galaxy Nexus last year, another in Google’s Nexus family of phones, and feel the same way. I have already had the device updated from Ice Cream Sandwich to Jelly Bean, well before other devices in the market, some of which will never be updated.

In short, stock Android is the way Android was meant to be. I know the phone manufacturers think they can differentiate via software, but I wish they would focus their effort on hardware differentiation and leave Android alone. There are many areas in the hardware where they can differentiate – camera quality, screen resolution, form factor, colors, build quality, price points and more.

I’m convinced that if more manufacturers went to a stock Android build, they would end up with happier customers and a lot less headaches supporting multiple versions of the operating system. Sure, they’d have to give up some of their secret sauce, but I don’t think anyone’s really buying the phone based on the subtle software features they’ve added. I bet they buy it primarily based on form factor and price. In fact, building devices using only stock Android could be another way a device manufacturer could differentiate themselves from the crowd.

As I mentioned, I’ve owned two stock Android devices and have purchased Nexus devices for family members. I don’t ever plan on going back to a skinned version.

So if you ask me , “what is stock Android?” My reply is that it’s the only way to go.